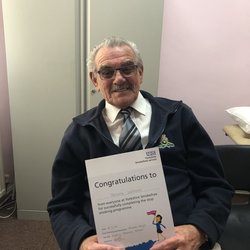 Terrence started smoking when he was 17, it was hard to resist when cigarettes were so cheap in Germany! After 64 years of smoking, Terrence decided 2019 would be the year he was going to quit smoking for good.

Terrence attended weekly one to one support sessions at his GP surgery in Sheffield, where he received the support and nicotine replacement therapy, he needed to finally kick the habit.

Smoking up to 20 cigarettes a day, Terrence knew smoking would benefit both his health and his bank balance. He also plays the bagpipes on a weekly basis and he didn't want smoking to start affecting his bag pipe playing!

Terrence said the support he received with Yorkshire Smokefree, along with using Champix, was excellent and thinks that without the fantastic support, he would never have managed to stop smoking.

He's already feeling the benefits of being a non-smoker, his chest is much clearer and even though he has COPD, he feels has more air in his lungs than ever before - great news for a bag piper! The fact that everything tastes better than when Terrence was a smoker has also been a great motivation.

With money he's saved from smoking, he's been able to treat his great grandchildren too!

If Terrence could give one bit of advice to anyone who has recently started smoking, it would be 'don't be a fool!