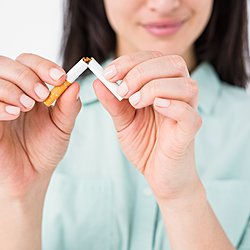 Andrea was 19 years old when she started smoking and remembers it was due to starting work with other smokers and it was seen as socially acceptable 50 years ago. Andrea used to smoke on average around 15 cigarettes a day and had tried to quit smoking before she contacted Yorkshire Smokefree’s Barnsley service.

Andrea felt really motivated to quit and found the support she received was beneficial. Her reason for quitting was to improve her health stating she ‘couldn’t even walk upstairs without being breathless’ before. Andrea’s children and grandchildren were real motivators for her to improve her overall health and fitness as she ‘wants to be around a long time to see them grow up’.

Barnsley resident Andrea attended her first appointment with her quit plan already in place and found the extra support she needed from Yorkshire Smokefree to help her on her way. She had already been quit for a whole day before attending her appointment but was already struggling with the cravings having not used any nicotine replacement therapy (NRT). Her advisor was able to support her by offering advice on NRT and discussed habit and routine changes; Andrea found using a combination of patches and lozenges most beneficial for her and says “the support from my advisor was excellent, I couldn’t fault it – it’s been really helpful to keep me motivated and on track’. She also said her family kept her motivated and that she can’t wait to show her grandchildren the certificate she was given from the service for completing the programme.

After being smoke free for 12 weeks, Andrea has found she has more energy, she can walk upstairs without getting out of breath and she can walk her daughter’s dog for longer now her fitness has improved. She has been going to regular Body Pump classes at the gym since quitting and doesn’t have to worry about having a bad taste in her mouth now she doesn’t smoke.  She has also seen her finances improve and after previously spending £120 a month, Andrea is now putting the money towards a holiday at the end of the year.

Over Christmas, Andrea noticed she was able to get through the festive period without needing a cigarette and even when her cat unfortunately passed away, she was able to tell herself that smoking would not help her deal with the grief. She said, “I had a flashing thought about smoking but this is all it was” and knows it wouldn’t have helped her cope any better.

Her advice to anyone who is thinking of starting smoking is to “don’t do it, don’t be manipulated by anyone either to do it.” Andrea is determined not to smoke again and feels this time she can be smoke free for good. For those who are thinking about quitting, Andrea says “just do it – your mind has to be ready to quit but once you do, you’ll so feel so much better for it.”

If you feel inspired by Andrea's story and would like support in quitting smoking, register for a Callback Request today.