Organisations across the NHS and the world of public health today (11th January) gathered in Parliament to declare their support for a smokefree NHS.

NHS organisations signing the NHS Smokefree Pledge [1] are making a commitment to help smokers in their care to quit and create smokefree environments that support them to do so. The Pledge has been developed by the Smokefree Action Coalition [2] and endorsed by Steve Brine MP, the Public Health Minister, Simon Stevens, Chief Executive of NHS England, Duncan Selbie, Chief Executive of Public Health England, and other health leaders [3].

Smoking is the leading cause of premature death and disease, and kills 79,000 people every year. [4] The NHS has a key role to play in reducing the number of people who smoke, yet smoking places a major burden on the NHS with 1 in 4 patients in hospital smoking [5]. The cost of smoking to the NHS in England is £2.5billion every year. [4]

The commitments in the Pledge include:

“Most smokers want to quit and we’re seeing good progress on lower smoking rates. To build on this we’d now like to see NHS organisations across the country sign up to the NHS Smokefree Pledge.”

“The NHS admits a patient every minute because of a smoking related disease and 1 in 4 beds are occupied by a smoker. Given that most smokers want to quit, this is an unparalleled opportunity for NHS staff to do all possible to help them quit.

“NHS England has committed hospitals and mental health services to become truly smokefree by 2019 and I am delighted that the Smokefree Action Coalition has made it possible for each of them to publicly pledge their commitment to this.” 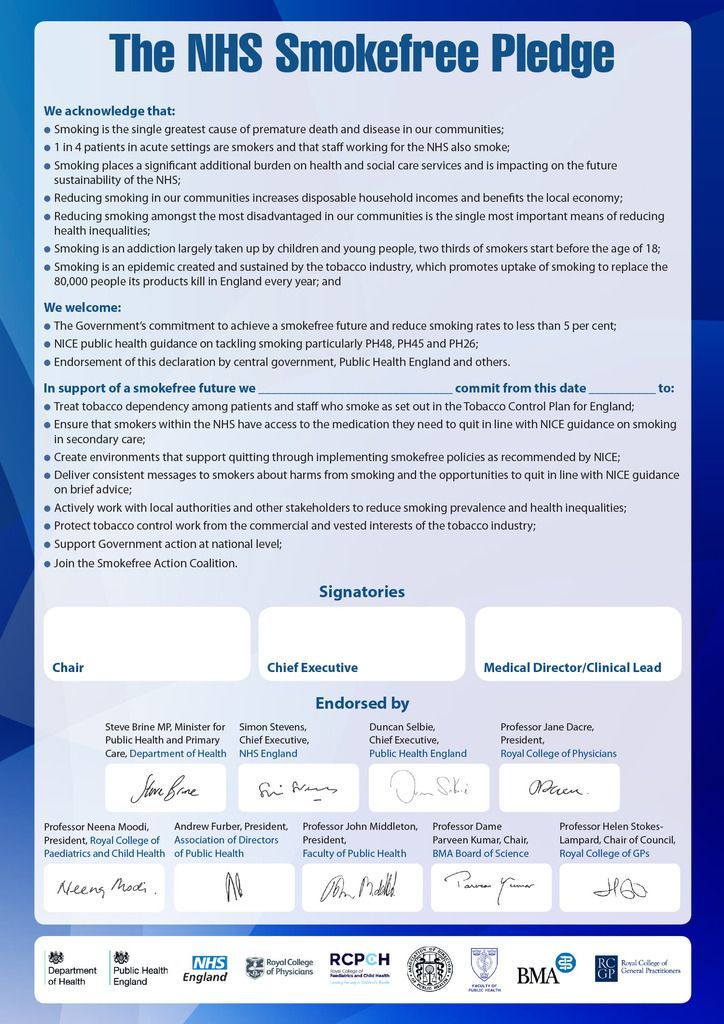 [4] Towards a smoke-free generation: tobacco control plan for England. Department of Health, 2015.