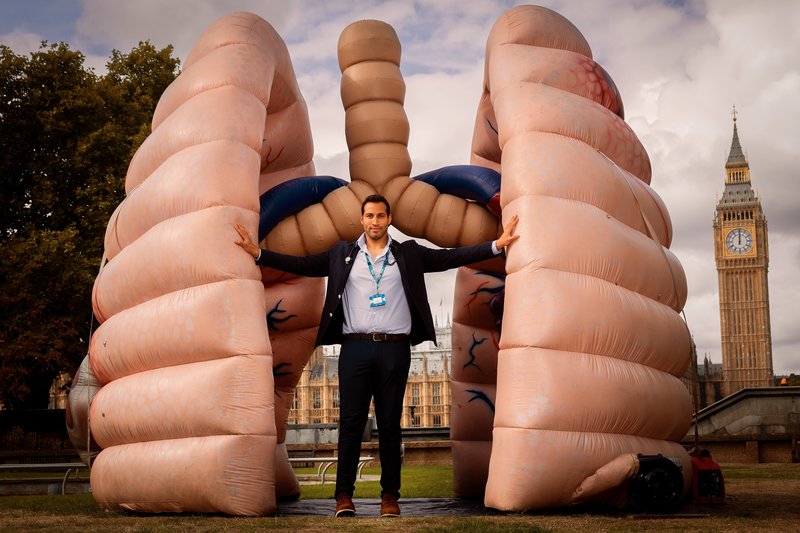 The Let's Talk Lung Cancer Roadshow – a national tour of the world’s first walk-through lung exhibit - is coming to the Alhambra Shopping Centre on Thursday, November 10.

People will be able to step inside the giant pair of 12 ft high x 15 ft inflatable lungs to learn more from health professionals about lung health, lung cancer, and the effects of smoking.

The NHS are touring England’s lung cancer hotspots with the giant inflatable lungs and specialist teams of volunteers in a bid to catch more cancers early and give people the best chance of successful treatment.

Community engagement teams and volunteers will be on hand to talk to members of the public and encourage those with suspected symptoms to visit their GP as soon as possible.

Nearly 200,000 people smoke in South Yorkshire and Bassetlaw. More than half of those people will die prematurely from smoking-related illness, losing on average 10 years of life. The national average for adults who smoke is 13.9% - whereas in Barnsley the rate is 18.3%.

There are often no signs or symptoms or lung cancer at an early stage. As a result, sadly around 7 in 10 cancer patients are currently being diagnosed too late to be cured.

Dr Muhammad Rahim Khan, Respiratory Consultant in Barnsley Hospital said,: “Lung cancer is common and is the leading cause of cancer death in the UK. Early diagnosis is the key to curative treatment but there may be no symptoms at this stage. Screening saves lives. Get your lungs health checked.”

South Yorkshire and Bassetlaw Cancer Alliance is helping to pilot targeted lung health checks to help find problems early and at a stage when treatment could be simpler and more successful - ultimately saving more lives.

Doncaster was one of 10 areas nationally chosen to pilot Lung Health Checks and the pioneering programme started in March 2021. It was extended to Bassetlaw in August, will begin in Rotherham later this month and in Barnsley in the New Year.

From now until March 2026, mobile scanning units will make their way across the South Yorkshire and Bassetlaw area in a bid to help detect lung cancer earlier, as well as identifying other lung conditions.

The Lung Health Check programme could help improve lung cancer survival rates across the area with a recent study showing that such checks can potentially pick up changes earlier and reduce lung cancer deaths by around 26% in men and 40% in women.

Dr Jason Page, Clinical Director, South Yorkshire and Bassetlaw Total Lung Health Check Programme LHC said: “The benefits of screening are clear to see. The programme is reducing the devastating impact that lung cancer has on hundreds of families across the region.

“Lung cancer remains one of the most common cancers accounting for thousands of deaths a year in the UK. Because lung cancer doesn't always cause symptoms at an early stage, it is frequently diagnosed late when treatment options are more limited, and survival rates are lower, but if caught early, it's much more treatable and the survival rate is much higher."

The “Let’s Talk Lung Cancer Roadshow”, in collaboration with Roy Castle Lung Cancer Foundation, is travelling to 26 locations around the country as part of the NHS Help Us, Help You campaign.

NHS data shows these areas have significantly higher rates of lung cancer, with the roadshow aiming to start conversations about the illness and its symptoms – such as having a cough for three weeks or more.

In a new survey, less than two-thirds (57%) of the public recognised a cough for more than three weeks as a possible symptom of lung cancer and almost a quarter of respondents (24%) said they would do nothing or wait if they had this symptom.

Only half (55%) said they would contact their GP if they had a cough for three weeks or more, despite this being a key symptom of lung cancer.

NHS National Cancer Director, Dame Cally Palmer, said: “A life-saving diagnosis can begin with a simple conversation, and the NHS is doing everything it can to bring lung cancer to the forefront of people’s minds.

“So if you have had a persistent cough for three weeks or more, feel aches or pains when breathing or coughing, or show any of the other symptoms of lung cancer, help us help you and please come forward for care.”

The rollout of the campaign comes at a time when NHS teams are treating people for lung cancer at pre-pandemic levels.

The number of people coming forward for lung checks is also now back at pre-pandemic levels, with over 10,000 referrals over the same two-month period, having been the slowest of all cancer types to recover.

INFO BOX: The main symptoms of lung cancer include: