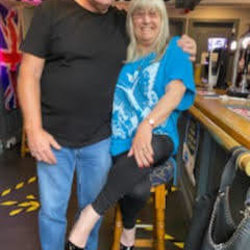 Congratulations to Sue from Sheffield on her amazing quit! She had the great support from her husband as well as Gemma from our team. Sue has also finally got the eternity ring of her dreams!

I had a heart attack earlier this year and was admitted to the Northern General hospital. It was a major wake-up call that instantly made me determinded to quit for good - I knew if I didn't I would not be here much longer. I didn't smoke whilst I was in hospital and was given nicotine patches when I was discharged back home so that I could keep going with my quit attempt. I was referred to the community team for support.

I wasn't confident that I could achieve becoming Smokefree on my own but as soon as I had my heart attack I promised myself I would never smoke again. Getting the support from the stop smoking service and using the medication really helped boost my confidence that I could keep going. I couldn't image myself with a cigarette now and I was a heavily dependent smoker who smoked x25 a day.

I used the 24 hours patches which I found very effective. I started on high strength and gradually moved to the low strength over the course of 12 weeks.

They were really helpful, I couldn't have quit without the patches or Ge,,a!

The regular telephone support I recieved from my stop smoking advisor Gemma helped me to quit and stay smokefree, as well as my husband who decided to quit cold turkey to support me. I also tried to make changes in my daily routine - I cut down on coffee and switched to fruit tea and made sure the fridge was full of fruit and yoghurts so that I didn't reach for unhealthy junk food when I was tempted to snack. I still went out to the pub to meet with friends who were really supportive and so glad that I was OK after my heart attack. I did have a drink but cut down on the amount that I would usually have so that I wasn't tempted to smoke.

My health has improved since I quit with my taste and smell being improved and I no longer cough and wheeze.

The extra money my husband and I saved from quitting meant that we were finally able to purchase my long-awaited eternity ring. We have been able to decorate the house and treat ourselves and family. My husband has bought a new car and we are planning to go on several mini breaks.

It was very easy to access the service and really helpful that I didn't have to go anywhere to attend an appointment, especially after having a heart attack.