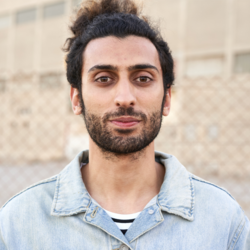 The 36-year shop keeper had smoked between 10 and 15 cigarettes a day for 20 years. "Sometimes I managed to stop for a whole month, but every time I saw someone with a cigarette in their hand it made me want one," he says. "Eventually the temptation would get too much, and I'd light up again. “My wife had become concerned about my health and showed me articles on the internet and YouTube about lung cancer and chest infections. “We have two children, and she didn't want them exposed to smoke, so I had to smoke in the garden," Nasir says.

Nasir told a family friend that he wanted to give up smoking during Ramadan. "We cannot smoke during the day during the time of fasting, so I thought that if I could give up smoking during the day, there was no reason why I couldn't eventually stop altogether," he says. His friend advised him to contact the Yorkshire Smokefree Service, which was runs stop smoking session’s offering support to people trying to give up.  Nasir google the service and went on the Yorkshire Smokefree website and self-referred from there.

Nasir was booked into the Ramadan Evening clinic which was set up specifically for clients wanting to quit smoking during Ramadan.  Between sessions, Nasir would phone his advisor whenever he had the urge to light up or was struggling copping without a cigarette. "I liked quitting with support from the service and looking at other stories on the website knowing that there are other people in the same situation and being able to talk to someone who knew what I was going through was great," he says. "My advisor Farai made various suggestions for getting through the first few days after my 'quit date'."

'It gets easier'
"The first few weeks were hard. Not eating or drinking anything during the day is difficult, but for me not smoking was harder. “At night, Nasir chewed nicotine gum whenever he felt like smoking a cigarette. "Stopping smoking isn't something you can feel half-hearted about," he says. "There were a few weak moments at first when I told myself that a couple of cigarettes wouldn't hurt, but I knew that if I gave in and had one, I'd be smoking 15 a day again by the end of the week." If he had a craving during the day, he sat in a cafe and read a paper until the urge had passed. "I think the main reason that I finally managed to stop was that I really wanted to," Nasir says. "It does get easier as time goes on. After 8 weeks I was able to stop using the nicotine gum, and I'm proud to say that I have not smoked since the start of Ramadan and I am now over 8 weeks stopped. "Today, I can do physical exercise without getting breathless and my head feels clearer. My wife is proud of me, and it's nice to know that I don't have to go outside and stand in the cold or rain just for a smoke.