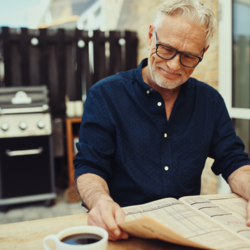 I was 17 when I started smoking. Back then, cigarettes were everywhere, and there was a lot of peer pressure to be a smoker. By the time I was 19, I was smoking 20 a day.

I tried to quit lots of times and had a lot of false starts. I have had asthma since I was 6 months old, so I knew it was not helping. But every time I tried I would end up starting again. At one point, following a 2-week hospital stay, I managed to kick the habit and stay off them for the next 6 months. But then I changed job, and I started again.

I was diagnosed with COPD in 2011, and I knew it was time to quit smoking. The following year, I tried to quit using my local NHS smoking cessation advice at my GP surgery. But that did not work, so I tried again the year after that. The advisor who offered the service was always happy to hear I wanted to have another go!

Finally, I decided enough was enough. Late June, I decided that I was going to have my last cigarette. I did not want to make it a New Year’s resolution as I have always been bad at keeping those!

On the day, I had a telephone consultation with Farai, and I picked up everything he could throw at me patches and plastic inhalators.

I would get a telephone call from my advisor every single week. He was excellent. Towards the past weeks, he offered face to face appointment and he would have me use a carbon monoxide monitor to check my breath, which was really useful for me because I could see how much my results were improving week by week.

I kept using my nicotine replacements and found the inhalators really helpful in particular for when I was driving. It gave me something to occupy that part of my journey to work and home again, when before I would just have smoked cigarettes constantly.

Having someone to talk to helped so much

Having an advisor to talk to about quitting smoking was so helpful. We would discuss how the products I was using were beneficial, and how I was coping emotionally without it, as well as how to manage the fact that at the time, my wife was still smoking, and I would see cigarettes around the house.

The advisor told me about this client zone. I could log in and tracked how much money I was saving too, which was great!

It was hard to quit. But I knew I really needed to do this. And my advisor kept on encouraging me, testing me on the monitor.  Having somewhere to physically go once a week kept me on the straight and narrow.

2 months after I started my quit journey, I was nicotine free. But things were different when my wife tried to quit.

Things were different for my wife

It was so good to have that level of support. But I know for lots of people, NHS cuts means that’s not the case anymore.

A little while after me and my wife moved to Swindon, she decided she wanted to quit smoking too. But she had a very different experience to me.

She saw the cessation nurse at her local surgery once, but when she tried to go back, the nurse was not there anymore. The service had been discontinued. They offered an alternative, but it was further away, and it was not practical. We were disappointed that the service was not there.

My wife had to give up using her own determination and willpower. I think if she had had the support I had, it would have been much better for her. And I know that if it had been me in her position, I would have got back on tobacco quite quickly.

Having that facility available to me when I was giving up helped me stay strong and inspired me to keep on going.

Everyone should be offered that support

I have been tobacco free for 2 months now, and I noticed how much better I felt afterwards. It got to the point where even though I have bad asthma and COPD, I was able to go out for long bike rides every day, which is really nice.

I would recommend everyone who is thinking of quitting should go and speak to the Yorkshire stop smoking team. It is good to talk to a real person.

I think everyone who is trying to quit smoking should be offered that NHS support, especially if you have already got a lung condition - that service is crucial.