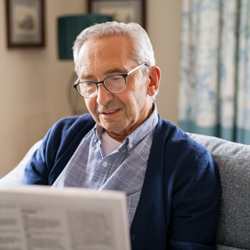 Once upon a time many years ago in 1941 during the 2nd world War a little boy was born called Eric delivered at home in Castleford West Yorkshire, a small town with a coal fired dense smoky shrouded sky over him to breathe and live under. My first employment was delivering News Papers at age 7 walking the streets carrying a bag half his weight around all the houses locally which took an hour then home and off to school.

One dark miserable morning while I was on my round he noticed a cigarette half smoked on the floor and put it in my pocket.  Later that day after school while in their secret den (an old air raid shelter attached to the Castleford football ground) with my mates a candle was lit. I produced the tab end from his pocket and being and like most mischievous kids at that time a match came from nowhere and lit the cigarette and we all had a puff from it.

From then delivering papers and looking on the floor for tab ends to make into cigarettes for the gang was the norm.   Leaving school 1956 I started an apprenticeship  with the  NCB. 6 days work for £5 per week.   Years later after leaving the  N.C.B   I enrolled  on a  welding course. Then started travelling  round the UK  and abroad ,two war zones included trying to earn a better living for my family.  This is where my life changed. I was out in the big wide world  Power Stations  - Petro Chemical industries  earning more  and being able to buy more cigarettes pipes and cigars etc.  These places were hazardous  asbestos related places  later with health problems 30%  asbestos  poly- arthritis even so I enjoyed my work and life and if I had to do it all again I would.

The moral of my story in retrospect  is that I loved working  but the more money I had  the more cigarettes etc I could buy which was 2 x 50g packets of rolling tobacco per week.   When young, fit  and healthy you do not think of having health problems until you are old and when the problems start it is too late.

Then out of the blue I received a text from  Carrie at Yorkshire Smoke Free asking  If  I was interested in stopping smoking , We had a chat and  she convinced me to give it a go, a few days later the patches came I had my last cigarette at midnight  I put a patch on  and started  the course November 4th.

From November  4th 2021,  I didn’t feel I wanted a cigarette and I felt good even after 1 day without.  But I must say that I fell by the wayside on New Years eve and smoked 2 cigarettes  which I regretted afterwards.  It is now  February  8th 2022  and  I have not smoked a cigarette since that day at New Year. Stopping smoking is hard as I smoked for 74 years but with Carrie`s help I have done it and I feel great now my 81st year!

I would advise  anyone  wanting to stop smoking  to contact Carrie or anyone in the Stop Smoking Service. It is free and you will  never regret it. Go on  give them a call.

Carrie,  my course is now over and I will not let you down. I wouldn’t  have been able to do it with out you.  I wish you all the best  Thank you once again.