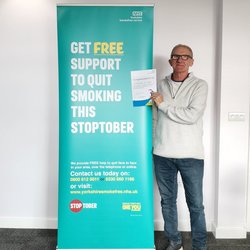 From the age of 11, Charles always remembers carrying around a pack of 10 Park Drives in his pocket.  He’d seen his parents smoke and soon enough he was smoking between 10-20 cigarettes a day up until the day he retired.

Following retirement and with more time on his hands, Charles’ consumption increased to 20 – 40 cigarettes a day; very quickly he noticed this increase affecting his breathing, which is when he decided he needed to quit.

Charles’ first quit attempt was with Yorkshire Smokefree Calderdale back in 2015 when he stayed smoke free for nearly 7 months. After a few attempts trying various products including nicotine patches and lozenges, Charles set his final quit date and has committed to not having another cigarette, knowing that it only takes one cigarette to trigger his habit again.

Throughout his attempts, Charles always returned to Yorkshire Smokefree as he knew the combination of support from both from the advisors and other smokers in the group sessions meant the whole quit journey would be much easier. Charles’ wife and family actively encouraged him to keep in touch with his local Calderdale clinic as they knew that, teamed with his willpower, he could put an end to his addiction!

Charles attended regular groups and appreciated hearing other smokers talk about their own experiences of quitting – sharing helpful tips and ideas to take home as well as some fun anecdotes!

Since quitting Charles has felt much better, he can walk faster, he has stopped coughing, his breathing has improved as well as not smelling like an ashtray! He’s also saved at least £100 a week from not buying tobacco and likes having the extra cash in his pocket.

If Charles had his time again trying that first cigarette, he’d “punch himself for being so stupid!” and now plans to call into the group at Laura Mitchell Health and Wellbeing Centre in Halifax once a month to do his carbon monoxide reading and keep reminding himself how well he’s done in staying smoke free.

He really wants to say to other smokers not to put off quitting, don’t wait too long before seeking help to quit as the longer you put it off the harder it gets to take that next step!

If you feel inspired by Charles' story and would like support in quitting smoking, register for a call back at: https://yorkshiresmokefree.nhs.uk/pages/callback-request