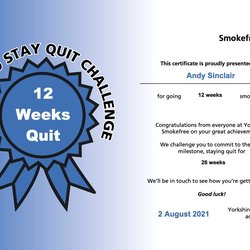 As a service, Yorkshire Smokefree have noticed a drop off in those who commit to stay quit, with a few people relapsing and starting smoking again. To try and cut this number down and help prevent relapse, we have created a new challenge called "Commit to Stay Quit". With this challenge we have virtual group sessions where the clients talk to other group members and give out their hints and tips and ways that they are quitting and preventing relapsing.

Andrew, who we previously spoke to about his quit, decided to join us for our session as a guest speaker. Andrew is 51 years old and his quit date was 10.05.21. Andrew has collected his 4 and 12 week quit certificates, his 26 week follow up will be on 8.11.21

Andrew joined the virtual follow up session today as a guest speaker and to talk about his quit journey to date. He was very supportive of the other group members and listened to what they had to say before he gave his own experiences. Not only did he give some useful hints and tips about remaining quit, but he also connected with what clients had to say and got a lot from the session himself, to the point he would like to attend again for his own relapse prevention.

The main points he wanted to get across were: -

Andrew came out of the session today asking if he could come back to the group as he had enjoyed talking with people, who could relate to his current experiences. Andrew felt this would help with his own relapse prevention and plans to contact service again, at his next milestone 8.11.2021, which would make Andrew 6 months quit.

If you're ready to commit to stay quit, contact us today and you can join one of our virtual group meetings.

There are many ways we can help:

Our online quit tool will allow you to create your own personal profile and will support you on a daily basis through your quit journey.