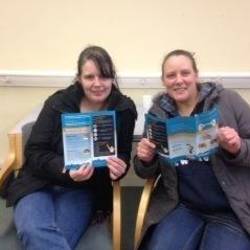 The two sisters were inspired to attend our Calderdale stop smoking group sessions after their father was diagnosed with chronic obstructive pulmonary disease (COPD). The illness is more likely to affect those who smoke than non-smokers, but it can be caused by a genetic condition.

Sarah and Julie both knew they were at risk to inherit COPD, and decided to quit together to keep their chances as low as possible.

“I watched my dad struggle daily to breathe and I didn’t want my kids to see me like that.

Both sisters have children themselves who also influenced their decision to quit for good. Sarah told us she easily became out of breath when walking, and Julie wasn’t as active with her son as she would have liked.

With their different lives they had separate difficulties to overcome. Sarah found it hard not to smoke after meals, and Julie was in the habit of smoking when she had a night out. However, they have been supporting each other in and outside of the group sessions which has made the experience a little easier for the sisters.

We were extremely pleased to hear that they found the group sessions very helpful!

“The group is very important, without them I probably would still smoke.”

The Yorkshire Smokefree Calderdale team talked the sisters through their options; including advice on nicotine patches. Julie has told us she found the service very supportive and hearing about fellow quitter’s experiences in the group sessions has made her feel more comfortable with her own decision to quit smoking.

Since they have quit, the sisters are feeling fantastic! Both have saved money but the most important benefit to them is their health. Sarah is feeling fitter than ever before, with improved skin and can now be more active with her children. Julie has taken up running as she is no longer easily out of breath! She also is enjoying finishing a long promised game of football in the garden with her son.

We’re proud to stay you’ve quit with us! Keep up the fantastic work, Sarah and Julie.